Lungfan (1995) was coined by Hassan Khan and Amr Hosny to describe the feeling of hyperventilation caused by thousands of fans imagined in one’s lungs. This sensation was a driving force in Khan and Hosny’s daily lives and experiences in 1990s Cairo, as a result of the intense social, intellectual and subcultural environments they were immersed in.

Lungfan is been shown for the first time at SALT on the occasion of Hassan Khans first retrospective at SALT Istanbul. The last time it was exhibited in Cairo 1995 as a slidshow and sound piece. At that time the work was negatively received by its audience. Its lack of one single familiar form and even political position caused it to be framed as a work spreading enemy spy propaganda. Although produced seneteen years ago under specific circumstances, Lungfan remains current in its projections on the conditions of histories, culture and societies. The work encapsulates several recurring interests for Khan, in particular the manipulation of recognizable forms coupled with the layering of sound and an attempt to reduce personas, objects and actions to their core values also noticeable in the work The Twist (2012).- 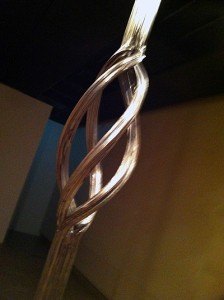 The Twist: A work such as Banque Bannister (2010) is composed from focusing in on one of these details taken from daily life. In this instance it is an exact copy of the bannister erected at the entrance of Banque Misr in Cairo. Yet Khan’s version is unrestrained by the original’s context and becomes its irrational replica. Once a gleaming introduction to the bank’s wealth and power that has slowly become weathered by the influence of the elements, Banque Bannister exists perpetually in this perfected form. It also defies structural logic, floating independently, refusing to acknowledge the laws of gravity. Khan further explores these ideas in The Twist (2012), where the precise and discrete beginning and end of a twist he had noticed in a railing is produced as a sculpture. For Khan, the nonfunctional twist in the railing, an ornamentation for its own sake that can be read as a symbol of property, wealth, knowledge and aesthetic judgment, in essence stands for the refinement of societies and cultures.