Ansar Dine, a radical Islamist militia, has set about destroying mausoleums and shrines in the historic Malian city of Timbuktu, which was once a great center of Islamic learning in the 15th and 16th centuries

by Ishaan Tharoor from Time 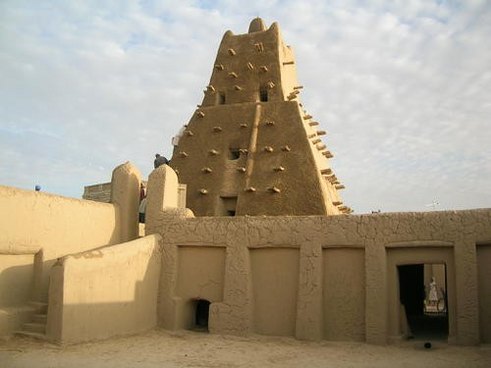 It was a singular, defining act of barbarism, beamed out live for the world to see. In March 2001, Taliban fighters and grandees clustered around the famed giant statues of the Buddha in Afghanistan’s Bamiyan province, laid explosives at their feet and blew them up. The extremists’ shadowy leader, Mullah Mohammed Omar, lauded the destruction of the two towering 6th century monuments: “Muslims should be proud of smashing idols. It has given praise to God that we have destroyed them.”

Similar language and zeal was on air Monday when news emerged of an Islamist faction in Mali desecrating a number of tombs in the ancient city of Timbuktu, which in recent months fell under control of a separatist insurgency. “The destruction is a divine order,” said a spokesman from Ansar Dine, a radical outfit with alleged links to al-Qaeda. According to reports, the militants have set about tearing down centuries-old mausoleums of Muslim holy men in Timbuktu, a Saharan crossroads known in lore as “the city of 333 saints” and long a fabled destination for backpacking tourists. UNESCO, the U.N.’s cultural agency, says as many as half of the city’s shrines “have been destroyed in a display of fanaticism.”

In the puritanical strain of Islam adhered to by Ansar Dine (and the Taliban), veneration of Sufi saints counts as idolatry, a heretical practice that cannot be tolerated. Militants bearing guns, pickaxes and shovels reduced to rubble the tomb of Sidi Mahmoud, who died in 955 A.D. They have also knocked down tombs of two other prominent medieval saints, Sidi Moctar and Alpha Moya. One Ansar Dine spokesman told the BBC that they plan to destroy every single Sufi shrine in the city, “without exception.”

International outrage has been swift. UNESCO, which designates some of Timbuktu’s mosques and tombs as World Heritage sites, has desperately urged an end to the campaign of destruction. U.N. Secretary-General Ban Ki-moon deemed the acts “totally unjustified.” The International Criminal Court’s new chief prosecutor, Fatou Bensouda, suggested they should be considered a war crime.

But beyond scolding the Islamists of the Sahel, there’s little anyone can do to stop this wretched bout of iconoclasm. History is littered with the debris of toppled temples and smashed idols. Salafists and others who believe in a more orthodox brand of Islam harbor a particular animosity toward Sufism, whose mystical interpretation of the divine affords a more heterodox faith, steeped sometimes in local pre-Islamic traditions and a reverence for saints and deceased wise men. Islam, as it spread outside the Arabian world, did so in large part through the peaceful teachings of Sufi orders and wandering mendicants — not just under the hooves of conquering Arab armies. Yet, recently, Sufi shrines have come under attack from emboldened and radicalized puritans in countries like Egypt and Libya; in Pakistan, the Taliban and its affiliates have waged a sectarian war on Sufis, systematically targeting dozens of tombs and Sufi sites, while killing hundreds of devotees. 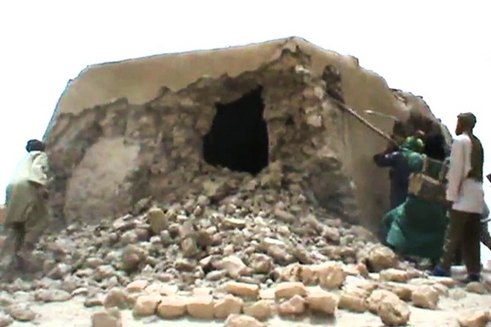 The many holy places and old libraries of Timbuktu, once a prominent center of Islamic learning in the 15th and 16th centuries, were preserved for centuries as a result of the city’s remote location on the path of now collapsed salt- and gold-trade routes. Yet they have come under grave threat in the months that followed the victories of an ethnic-Tuareg insurgency in Mali’s north, buoyed by Islamist fighters like the Ansar Dine. The latter, given their single-minded devotion to the word of the Koran, care little for the juridical wisdom of generations of Timbuktu’s theologians who critically examined Islam’s founding holy text.

And prospects for peace and dialogue in Mali do look dim. A military coup earlier this year threw what was once one of West Africa’s most stable democracies into chaos: the rebellion in the north gained ground and effectively captured half the country but is itself now splintering on religious lines, with Salafist factions clashing with more secular elements. The coupmakers in the capital, Bamako, have faced their own turmoil. Neighboring countries are contemplating military intervention; hundreds of thousands of Malians have been forced to flee their homes as refugees, with fears growing of an escalating humanitarian crisis.

In Timbuktu, it appears the Islamists are running roughshod over a fearful, traumatized populace. A gang of Ansar Dine allegedly tore down one of the doors of the 15th century Sidi Yahya mosque. Tradition has it that that particular portal would only open on the last day of the world — a local superstition wrapped up in messianic fables that the Islamists wanted to prove hollow. But, with their historic city crumbling around them, the people of Timbuktu have every right to imagine a world ending.