From outside the old soap factory looks like any other occupied house in Berlin and who has been here knows that there are many. The huge red building made out of bricks, with the tall chimney and the broken windows seems empty at first sight. Actually you hardly get any look on what´s behind the tall self made wooden fence. Only from the riverside you can have a glimpse on the “playground” of “Kater Holzig” and guess what is inside. 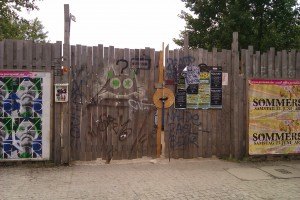 And what is inside, is a world behind your imagination. What started in April 2011 as a restaurant initiated by the former owners of the legendary “Bar 25” is transforming into an amusement park for adults. Apart from the outside area with couches, wooden barracks and a pizza place there is a club called “Rummel” (drive or hype) inside of the building. When you get inside you feel like in Alice´s Wonderland. Everything around you is colorful and does not look like it belongs there. On the one hand it is dark, messy and it smells a lot like alcohol and cigarettes. On the other hand it has this golden and bordeaux elements on the furniture and the walls which remind me of some royal castle. And then all of a sudden there is an old boat in one of the corners. Next week a spa area with the name “Schnurr Bad” (purr bath) will be opened. Every night and the whole weekend people can drink, eat, relax and dance and live out their creativity here.

But there is much more to come to this project. The two managing directors Johannes Fabian and Sven Kilian and their team of 80 regular employees and 30 freelancers are planing to create a new “Kiez” (a typical Berlin word for a city neighbourhood) in Friedrichshain. Just in front of “Kater Holzig”, on the other site of the river Spree and at the former space of “Bar 25” 18.000 m2 of empty waste land are waiting to be filled with life. The club and restaurant which already exist will be translated and a hotel will be built. Moreover an artist-in-residency project for young students and artists who will be living for a limited time for free in apartments in the “Kiez” in exchange for work will be started. To finance the project 30% of the space will be rented to companies which share the ideals of the project and want to participate in it, for example bakeries, fashion labels, supermarkets, restaurant, art galleries etc. The only problem is that there are other bidders with much more influence and money for this ground. One of these days an offer will be sent to the owner of the space, the BSR (Berlin´s waste management company) which is partly owned by the city. In the end they will have to decide if they want to sell the next piece of the riverside to a company which will construct luxury apartments or hotels there or to a creative project which will not pay the highest price but will enrich the city, create working opportunities and a space for everyone to live. 2 thoughts on “A magic adventure in and with „Kater Holzig“”

Cities, places, sectors and industries, urban and creative spaces and their transformations.
We use cookies to ensure that we give you the best experience on our website. If you continue to use this site we will assume that you are happy with it.Ok