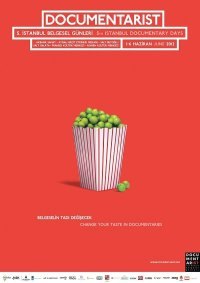 DOCUMENTARIST – Istanbul Documentary Days gets ready to celebrate its 5th anniversary between 1 and 6 June with a very special program. The event keeping its special position among the film festivals in Turkey with the quality of the documentaries presented, will continue to opening up new frontier in front of its attendees, with its 2012 program.

Sour green plums are set to be all the rage at the upcoming festival. Featured on posters as an alternative to popcorn and in trailers being consumed pensively by familiar faces in Turkish cinema such as Bülent Emin Yarar, Derviş Zaim, Tülin Özen, Muhammet Uzuner, Ayça Damgacı and Türkü Turan, the small green fruit is intended to symbolize the bitter yet addictive nature of the documentaries being presented at the festival this year.

Since the first year, DOCUMENTARIST hosts some of the masters of documentary cinema. The honorary guest of this year is Heddy Honigmann who is among the most important documentary filmmakers of our time. Beside retrospective screenings of director’s best-known films including “Metal and Melancholy”, “O Amor Natural”, “The Underground Orchestra”, “El Olvido”, the festival will host a ‘cinema class’ given by the director.