Turkish President Abdullah Gül visited the Google headquarters in California, where he rode in the company’s driverless car, he tweeted on his Twitter account. 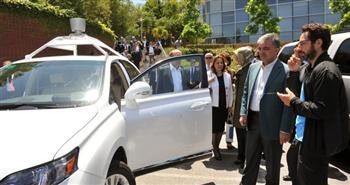 The president was greeted by one of Google’s founders, Sergey Brin, and given a tour of the facilities. Gül met with Turkish engineers working for Google and posed for a picture with them, which the president shared on his Twitter account.

Brin later showed the president Google’s driverless car, after which Brin, Gül and First Lady Hayrünnisa Gül took a ride in the car’s back seat. “The car drove close to 80 miles per hour,” Gül tweeted, “The security teams panicked when we entered the highway suddenly.”

Gül also had the chance to try on one of Google’s latest innovations, the Google Glasses. “There was a live video playing in a small scren on the glasses,” Gül wrote on the microblogging website. Constructing the Island of “Happiness”