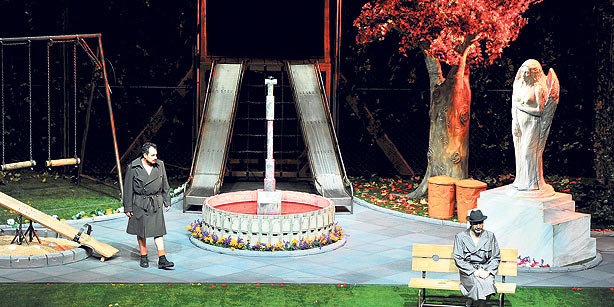 Turkey’s government is embroiled in a bitter dispute with secular-minded actors over freedom of expression in public theaters. Officials insist they respect the concept of artistic freedom, but Prime Minister Recep Tayyip Erdoğan has publicly derided stage actors as “Jacobins” who undermine traditional Turkish values.

The Istanbul City Theater’s April production of Daily Obscene Secrets — a play by Marco Antonio de la Parra that focuses on the lack of freedom under former Chilean dictator Augusto Pinochet — set off the spat. Conservative media outlets condemned the play’s themes of nudity and sexual depravity as “vulgar.” In response, Istanbul Mayor Kadir Topbas, a Justice and Development Party (AKP) member, promptly transferred artistic control of municipal theaters to his administration. Before, the theaters enjoyed autonomy to decide for themselves what to stage.

The move outraged actors throughout Turkey. “They [politicians] will decide everything for us, and they are not from the theater world,” huffed Istanbul City Theater actress Mahperi Mertoğlu at a recent protest outside Istanbul’s main municipal theater. “They don’t know anything about theater. It is incredible and unbelievable for us.”