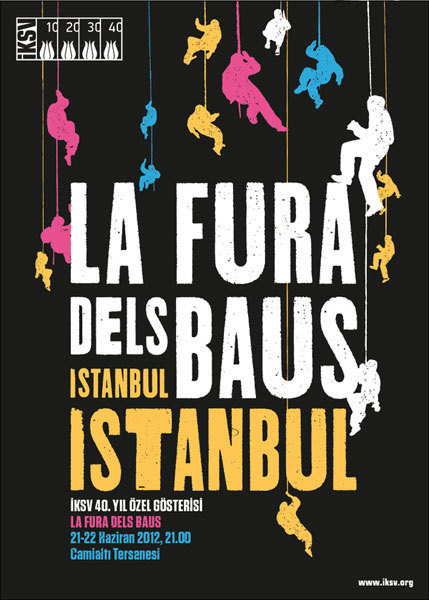 “La Fura is not to be watched sitting in the stands or from the ground or from a real or imaginary chair. If anyone was sitting, get up. This is not to see, but for living.”

Having staged more than 3000 performances in 250 cities to an audience of over three million people, La Fura dels Baus will take Istanbulites on a journey stretching from the past to the future.

Started in 1979 as a street theatre company, La Fura dels Baus diversified its creative labour in various fields including open-air performances, digital theatre, street theatre and opera. Blurring the boundaries between the audience and the actor, the Catalan company’s original and remarkable performances developed in accordance with the characteristics of the space have a large group of followers from around the world. Gaining cult status with their play Accions, La Fura del Baus prepared the opening ceremony of the 1992 Barcelona Olympic Games seen live by 500 million viewers. La Fura Del Baus’ open-air performance put on stage to celebrate the millennium brought together 20,000 people in Barcelona. Their interpretation of La Divina Comédia seen by 35,000 people in Florence and their performance La Navaja en el Ojo staged at the opening of the Valencia Biennial have been etched on the memories of their audiences. The company participated to the Salzburg Festival with their opera performance and also had their works staged in houses such as La Scala, Sydney, Bochum, Paris, Rome and Tokyo Opera Houses and Bolshoi Theatre. Achieving great success in Turkey with their play F@ust Version 3.0 performed in the 11th Istanbul Theatre, La Fure dels Baus has a unique way of combining music and movement in all of its plays and operas. The company was awarded Golden Méliès 2003 for the best fantastical film with their film Fausto 5.0 and uses the Internet in their performances for which they coined the term “digital theatre.”

The company’s new performance Istanbul, Istanbul commissioned by İKSV invites the audience to an extraordinary feast.

The tickets can be found at Biletix retail outlets and the Main Box Office İKSV (between 10:00 – 18:00 except Sundays). Vice News journalists back in UK after release from Turkish prison

May 9, 2012 Thomas Büsch 1 Comment
We use cookies to ensure that we give you the best experience on our website. If you continue to use this site we will assume that you are happy with it.Ok