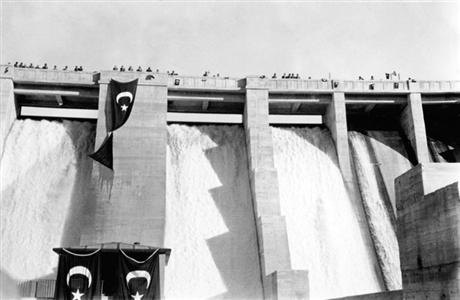 To make a graft you need two plants. One plant is chosen for its roots. This plant is called the stock or understock. The other plant is chosen for its flowers, fruits or leaves and only its branches are used. This plant is called the scion. There are various methods of grafting but simply put, grafting is the insertion of desirable or desired genes to be duplicated in a new scion/stock plant. Plants selected for desirable characteristics that can be maintained by propagation are called cultivars and are used as scions. For a successful grafting the tissues of the plants must be in contact with each other and both plants need to be kept alive until the graft has taken. The joints that are formed by grafting are never strong as naturally occurring joints, therefore they remain as physical weak points.

1930s newspapers in Ankara often published articles and photographs celebrating Ankara’s “seas” and “shores” as “modern recreational spaces of the new capital.” Ankara, at the time, an arid, drought-ridden steppe, was grafted with these “shores” and “seas” which were, in fact, modern hydraulic infrastructures, part of the modernization project of the Turkish Republic: the reservoirs of the Atatürk Model Farm (Black Sea & Marmara Sea)—built for irrigation, the Çubuk Dam (“Bosporus of Ankara”)—built for potable water supply.

These modern projects of a “modern” geography are cultivars, propagated by grafting an Ottoman scion onto an Anatolian root: İstanbul’s waterfront geography, onto Ankara’s barren land. Despite being modern and with ties to the past ideologically severed, these new landscapes nevertheless regenerated the urban practices of the old capital in the new one. The singular Directorate of Public Works of the 1930s, which propagated the cultivars of Ankara, proliferated into a complex machine of multiple ministries and government organizations to develop regional development plans through the 1950s. As a result, the cultivar of Ankara was re-grafted all over the country. Multiplied in a massive scale on the riverbeds of Anatolia and Eastern Thrace, the cultivars, consequently, transformed and mutated into a wild species of aggressive and invasive nature.

Modern Essays 5: Graft will reveal the physicality of the grafts by investigating the dam lakes harvested in Turkey as well as their forerunners, the cultivars of Ankara.