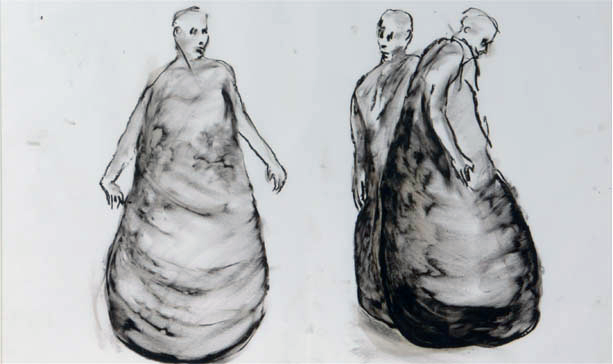 Juan Muñoz‘s oneiric sculptural scenarios present a skewed version of reality — one infused, former Tate curator Sheena Wagstaff once noted, with a “Borgesian notion of slippage between fact and fiction.” When the Spanish artist died in 2001 at age 48, he was at the peak of his career. The same year his “Double Bind,” Tate Modern‘s second Turbine Hall commission, had enthralled visitors with its set of static characters suggesting a parallel world stuck between the institution’s floors and walls; a large mid-career retrospective was about to tour America. More than ten years later, the public’s fascination for Muñoz’s work endures.

This week, Frith Street Gallery is opening “Juan Muñoz: An inaccessible moment.” Curated by the gallery’s Jane Hamlyn and Guardian art critic Adrian Searle — both close friends of the artist’s — the exhibition gathers rarely-shown works on paper and sculptures that were intended to be included “Double Bind,” but didn’t make the final cut. Searle shared with ARTINFO UK some of the thinking behind this much-anticipated exhibition. Not just any scarf

The Arab Fund for Arts and Culture is organizing the Screens and Streams second week’s film program. Following a first engaging week, the AFAC “Screens and Streams” initiative embarks with a new selection of Arab independent films.

April 7, 2020 Julie Peters 0
We use cookies to ensure that we give you the best experience on our website. If you continue to use this site we will assume that you are happy with it.Ok